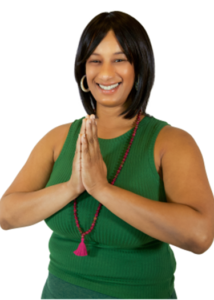 Kiesha Battles, 500 E-RYT is a full-time yoga teacher who began practicing Yoga in 2000. Over the past seven years Kiesha has created yoga programs, lead yoga retreats, managed the daily operations of a yoga studio, and was recently appointed as Co-Director of the Yoga Retreat for Women of Color at Kripalu Retreat Center. Known to many as the original black girl yoga magic.

Kiesha is a humble soul who connects to all beings first at their core. In 2016, after the Keith Lamont Scott shooting, Kiesha brought yoga teachers and studios together from all parts of Charlotte to practice together in marathon style teaching to offer community and reprieve from a city on fire. Through her efforts to co-found Yoga in Action Charlotte, this group of diverse yoga teachers aim to bring teachers together.

In honor of her leadership and audacious instincts for embodying yoga, Kiesha was honored and awarded the inaugural Self Care Charlotte Ambassador award. In 2017, Kiesha opened her own studio and yoga school, IAMYOGA. She graduated her first yoga teacher graduates and began the first ever yoga teacher training by women of color in partnership with the YMCA of Greater Charlotte.

Kiesha lives in Charlotte, NC with her husband and two school aged boys.

Learn more about her offerings at www.KieshaBattles.com