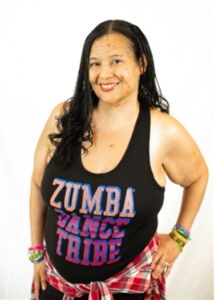 Rana Blue struggled with her weight since high school. For years she tried various fad diets and “miracle pills” to try and lose weight. That in combination with an unhealthy lifestyle caused her to balloon to 300 lbs. She had managed to lose 35 lbs, then was diagnosed with type 2 diabetes and put on medications that halted her weight loss. In September of 2009, she gave birth to her beautiful son Angelo, and it was during the late-night feedings that she saw the infomercials for Zumba Fitness. They joined a gym a few months later, and that was when her fitness journey began. Zumba was literally the only program she was able to stick with, and altogether after many ups and downs, she lost 150 lbs. It literally saved her life, and It was her very 1st Zumba Instructor, Mary, who saw the fire and passion for Zumba, and encouraged her to become an Instructor.

On April 16th, 2010, her dream became a reality. This was the day that dozens of tornadoes wreaked havoc across NC, but they persevered and her and her husband got their Instructor License!
From there she went on to get licensed in Zumba Toning, Aqua Zumba, and Sentao. She loves being able to encourage and motivate others, give them a great work out and see their beautiful smiles as they are getting their dance on, which in turn continues to motivate her to always strive to be better. She wants to be there for them just as her mentors were there for her. ❤❤❤