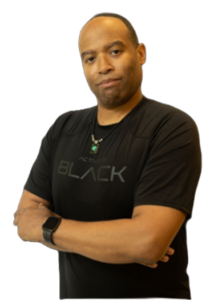 In 2009, Jerod decided to make a change for the better with regards to his health and found himself doing one of the things he’s always loved doing, but was never trained in, and that is DANCE. His love of dance and a chance meeting at a local dance studio led him into getting exposed to several dance workout formats. Jerod became actively involved and eventually certified in Latin Jam Workout, shortly thereafter licensed in Zumba.
In 2013, Jerod added an urban-based, world beats fitness program to his growing resume based out of Northern California called U-Jam Fitness and was a Coach and a Southern California representative for the format and has presented at several fitness events, including the Los Angeles FitExpo and the IDEA Health and Fitness Association as a presenter and a Blogfest attendee. During the pandemic, Jerod also became the creator of his own dance fitness format called Cardio Dance Party. In the summer of 2022 in Myrtle Beach, Jerod attended the GAINS FIT retreat and added COMMIT to his ever-growing resume. “It was their mission, their core values and not to mention their philanthropic goals and emphasis on community” that made Jerod want to become an instructor.
Jerod Williams is also a legal assistant, a playwright, a screenwriter and a freelance journalist who has written for several online magazines and had featured articles on movie reviews, award ceremonies, charity events and reported for the prestigious annual Mercedes Benz Fashion Week. Jerod has also self-published his play The Manipulation, Love, Lust and Betrayal of a Career Woman, which can be purchased through various online outlets.
You can find him teaching at the following facilities in or around the greater Los Angeles area: LA Dance Fit (Westwood), Heartbeat House Dance Studio (Atwater Village), 24 Hour Fitness (Compton) as well as on a handful of virtual platforms. His mottos he loves to use in class: “Get Yo’ Life”, “Leave it all out on the dance floor” and “Dance is THERAPY.”