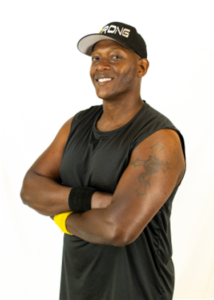 Born in The Year of The Dragon, it seemed inevitable that Eric Blue would be given the nickname of Dragon. Descending from warriors and fighters from all over the world and dating as far back as the 1400s, combat is in his blood. But sports, music, and dance are very much a part of his life as well. And Eric has been blending them almost flawlessly since he was six years old, even going as far as using his talents to change his basketball teams, cheerleading squads, and performance groups in middle school and high school.
Eric was born in Oriental, NC and raised mainly in Wilmington. But he got to experience other places, cultures, and adventures as a child by living in various East Coast neighborhoods from Brooklyn, NY to Miami, FL. Getting bullied for his intelligence, he began training in martial arts at four years old. The training conditioned his body and senses to where he could hold his own against grown men in a fight and improved his skills for the various sports he started playing and the dancing he was doing. His training turned into a passion for wellness, which he began to use to train other people when he was 16. Since his first student, Eric has not looked back.
After meeting his future wife Rana and marrying her in 1999, he began a new life in the U.S. Army shortly after. He continued to train people, mainly soldiers, throughout his Army career in strength conditioning, cardiovascular fitness, martial arts, and nutritional maintenance, using his own experiences as an example. He has an affinity for bodyweight exercises due to his belief on the importance of lifting your own body weight before lifting other weights. Shortly after their son was born, he and his wife stepped into their first Zumba class. They found that they had a passion for it which prompted Rana to get her Zumba license in 2011 and for Eric to get his in 2012. At that point, Team Blue was born, and they began teaching anywhere and everywhere they were allowed to share their passion, to include various fundraisers and community volunteer events. Eric took it even farther, teaching Zumba to active-duty troops on Fort Bragg, NC and Camp Casey, South Korea for morning physical training, which was a big deal since most of these military units are made up of men who believed that Zumba is “strictly for girls and gay boys.” Eric gladly and proudly shattered their preconceived notions by becoming the “Active-Duty Zumba Instructor.” But he did not stop there. He received his license for STRONG Nation and began to teach both formats “to offer balance” as well as an alternative to those who thought that Zumba might not be a challenge for them.
Eric knows that “the music’s gonna play, so you might as well dance.” So, he does exactly that. He knows that music reaches every person on some level, so he tries to tailor Zumba classes to reach every person that comes through the door. He also understands the struggle of getting through the door, so he encourages everyone to do their best, creates original and interesting choreography that people enjoy doing, and offers alternatives for every ability. Everyone from 85-year-old senior citizens to young children come to his Zumba and STRONG Nation classes and Eric enjoys the varying levels of success that his students achieve.