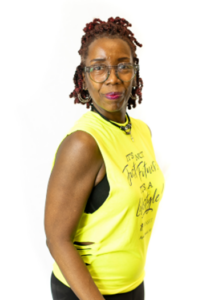 Martha McNair-Russell currently lives in Wake Forest NC, but originally hails from Baltimore, MD. Being a preacher’s kid and a former military wife has afforded her to live in many places from Lancaster, PA (Amish country) to Okinawa Japan. She spent over 20 years in the Northern VA area as an accounting professional but relocated to Raleigh NC in 2005 to be closer to her aging mother.

In 2016, after a long, difficult time carrying for her ailing mother, Martha McNair had unknowingly fallen into a state of depression at 52 years old. Throughout the 2-year period prior to her mother’s death, Martha had been neglecting herself while caring for her mother. She eventually found herself in a size 14 after being a size 6/8 all her life and it was devastating. She knew she had to make a change and fast. She joined a Wellness Center, did a 10-day JJ Smith Smoothie Cleanse, and began making major changes to her eating habits. It took her 9 months, but she lost 60 pounds, lowered her blood pressure, and reversed her pre-diabetes. In 2018 she was honored to be on the panel at the JJ Smith Sexy By Summer Conference in Washington and represented women over 50. Martha says, “At age 55 I feel the best I’ve ever felt! Lesson….it is never too late!”

Her mission statement is: “To improve the health and wellness of a community of women approaching midlife through accountability with a holistic approach.” Her goal is to open up the dialogue surrounding menopause, so women don’t have to suffer silently. Without a doubt Strength Training and Clean Eating are the foundational keys to navigating through the menopause years. In 2019 on her 54th Birthday Martha became an AFAA Certified Group Fitness Instructor. She started a Fit Fab & Fifty Facebook group born out of her experiences and gives daily support to women who are in the 3 stages of menopause. Information, exercise tips, meal-prepping and motivation are available her private Facebook group. She also speaks to Women’s Groups and churches to educate on the psychological and physical effects of menopause.

Martha is currently a licensed NC Real Estate Broker and Legal Assistant in Raleigh NC and married to Bruce Russell.