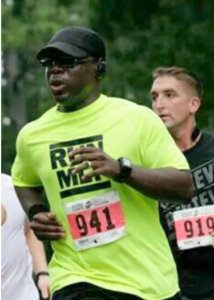 In early 2012, Matthew was about 40 pounds heavier 212 pounds) and at 5′ 6″, he was a pretty round little dude. He began losing weight by eating better and exercising more, that year he lost about 20 pounds. Going into 2013, he continued to lose weight and get in better shape physically. He also starting taking BOOTCAMP Classes at the local YMCA. That year a group of his fellow class members were training for an inaugural half-marathon in their town, but he initially didn’t know.

They always asked Matthew to come to the track and train with them, so he did. August 2013, he was talked into doing his first 5K. He continued to train and by October he had signed up for his first Half-Marathon. THAT DID IT ! After that he was hooked.

Between October 2013 to the present Matthew has completed twenty-three 5Ks, four 8Ks, three 10Ks, two 10milers, 13 Half-Marathons and 3 Full Marathons. He currently teaches Boot-camp classes 4 times a week at the YMCA of Durham and once a week at Millenium Sports Club also in Durham.

Matthew is the Captain for the Raleigh-Durham-Chapel Hill, NC Chapter of Black Men Run and a member of The National Black Marathoners Association.