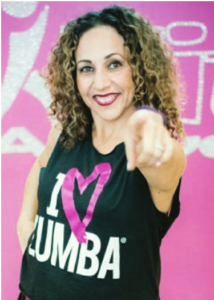 Maggie Pezeshkian is from Southern California. She is a chiropractic physician practicing with her husband in their family practice. They have 11-year-old twin boys.

Maggie has always been active in sports and exercise. Dancing has always been a major part of her life. She started teaching fitness bootcamp and stretching classes, right after her boys were born in 2008. Then she discovered Zumba Fitness. She became licensed in Zumba Fitness September of 2010.
In 2015 she was granted her Zumba Jammer license and she has been a Zumba Jammer since then, traveling and meeting many amazing people through this wonderful format.

In July of 2019 Maggie had the honor of presenting at the largest Zumba gathering, the Zumba Convention, or ZINCON as we call in, in Orlando Florida. She presented a session called Preventing ZINjuries. The session was about how to take steps to minimize chances of getting injured.
In addition to ZINCON she has presented at IHRSA and at IDEA world convention with Zumba Fitness and Kinesio Taping Association.

In addition to being a licensed Doctor of Chiropractic, Maggie has a BSDH degree from USC. She is also a Certified Kinesio Taping Practitioner, and she teaches this taping method as well. She is AFAA as well as CPR certified. She is licensed in Zumba, Zumba Basic 2, Zumba Gold, Zumba Toning, Zumba Gold Toning, Aqua Zumba, Sentao, Zumba Step and Strong by Zumba.

Maggie is thrilled to be part of the GAINS FIT family and look forward to meeting everyone and having a blast!

Maggie’s motto is Life is too short! HAVE FUN and be healthy!